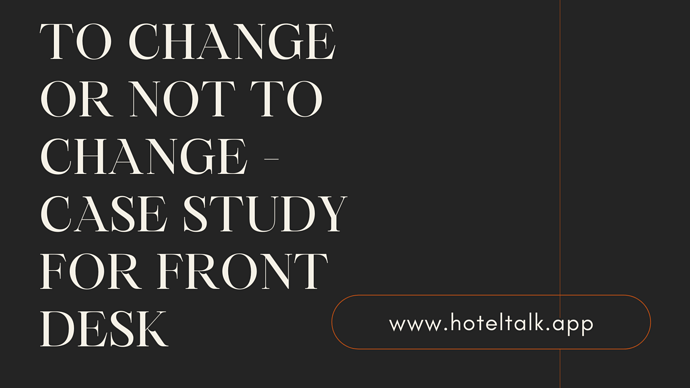 James has been described by the corporate office as the Miracle Worker because of the troubled properties that were turned around under James’s leadership. It is hoped the story at the Cloud Inn will have the same happy ending; however, the Cloud Inn is in a remote location, hundreds of miles from any other corporate properties.

The Cloud Inn is a 150-room full-service property with several medium-sized conference rooms; it caters mostly to business travelers and visitors affiliated with the local university. The bulk of the revenue is generated between August and May, with periods when classes are not in session being extremely slow. The hotel is at full occupancy only during football weekends and commencement.

Occupancy has been declining for the last year or so, with last month’s RevPAR at a record low. Since arriving at the Cloud Inn, James has made several observations about the hotel’s situation. It seems that most of the problems involve the front desk. After analyzing several previous months’ comment cards and informally chatting with guests at the hotel, James has sensed real dissatisfaction with the check-in process.

Several common themes have emerged: The process seems to take forever, the paperwork at check-in is perceived as lengthy and hard to fill out, the front desk clerks always appear to be running around “like chickens with their heads cut off,” and guests have been checked into rooms that were not clean. After discussing the problems with the front desk manager, James is in a quandary about how best to move toward a solution.

The front desk manager complains that the reservations staff does not always submit the day’s reservations to the front desk in a timely manner. Thus, guests arrive, and the desk clerks have no idea what rate was quoted or the room preference of the guest. This results in the guest having to refurnish information that was previously given when making the reservation.

Many times, clerks are forced to leave the guest at the counter while they attempt to retrieve missing information from the reservations. Further, with over 65 percent of the housekeeping staff speaking a first language other than English, communication is difficult at best, and room status is often mistaken.

The front desk manager suggests that the hotel advertise its check-in time to be from “say around 1:00 P.M. or 2:00 P.M. to 7:00 P.M.” to reduce the crunch time and allow front desk clerks more time to work with each guest’s check-in needs.

The front desk manager further states that the new hotel in town, the Suite to Sleep Inn, has an earlier check-in time and “it seems to work okay for them!” James asks the front desk manager how the staff might respond to moving to a fully automated property management system.

The response was not favorable; the front desk manager mumbled something about “old dogs and new tricks” and that the corporate office had not put any money into the place in years. What would make James think they would put out the cash now?

In an attempt to reach a compromise, James considers changing the check-in time in exchange for the front desk manager’s support of the conversion to an automated system.

1. What must James take into consideration before final decisions are made to adjust check-in time and install a fully automated property management system?

2. How should James proceed in resolving the communication issue?

3. Who needs to be involved in the final decisions? Why?

4. How might James present the case to the corporate office?