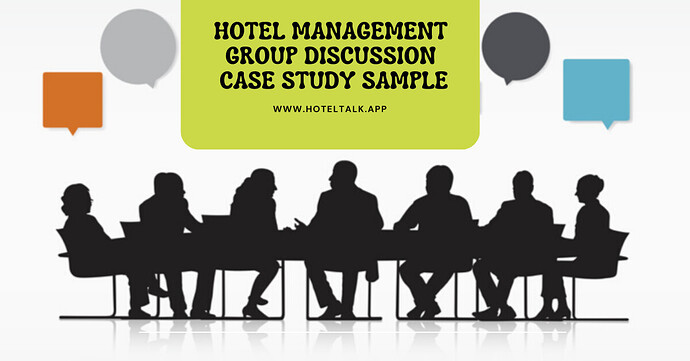 This is a case of two competing hotels, Morning Dues hotel and Cloud hotel that are both located in a medium-sized, tourism-based town in the Northeast U.S. The hotels are both competing for the same set of guests, as well as the same set of potential employees. They are both budget hotels, right next door to each other, with 60 guest rooms each and a view of the beach.

He also has incentives set up for the excellent performance of the front desk agents and training and development programs designed to give everyone information that will help them do their job better. There is a sense of teamwork at Morning Dues hotel and that helps everyone want to do a good job. His guest satisfaction ratings for his hotel are overall excellent. On a rating scale of 1–10, his hotel averages a 9.

The average length of tenure of his employees is 4 years, and his current front desk supervisor was promoted from within, along with his Assistant General Manager. Because of the small size of the hotel, Martin is actually involved with all of the hiring decisions and helps to give training programs himself, along with his leadership team.

Jacob is the General Manager of the Cloud hotel and deals with a very different situation. Jacob was brought in from another hotel in the same hotel group about 6 months ago. He was told by his boss that he needed to “fix” this hotel so that it would start having better customer satisfaction ratings and more return guests.

Despite the fairly high occupancy noted during peak seasons, the off-peak season occupancy is only 50%. Also noted by his boss, the occupancy should be as good as the Morning Dues hotel. Jacob has been with his hotel group now for 2 years and he came out of the accounting and finance department in his old hotel. He has a great understanding of the numbers in the lodging industry but has not been involved with the human resource aspects of the job.

The turnover of hourly employees at Cloud hotel is 120% and that means that Jacob is constantly running the hotel short-handed and with new employees.

The Cloud Hotel has been doing the hiring through a human resource practitioner in the hotel that was put in the position because she really could not handle serving guests at the front desk very well.

Sally was promoted to human resources a year ago after she had one too many altercations with the guests at the front desk. The owner of the hotel wanted to make sure that she could not make any of the other guests angry, so he promoted her to a human resources practitioner.

Since that time, she has been busy trying to keep up with hiring and she has had no time for training employees. Because she is so busy, paychecks often come out to employees late, there are no policies written down for employees to use as a guide for performance, customers are treated badly by new and poorly trained employees, and the departments of the hotel do not communicate very effectively and therefore everyone blames everyone else when things go wrong.

The average length of tenure of the front desk agents at the Cloud hotel is 3 months and the customer satisfaction rating at the Beachside is a 6 out of a 10 possible rating. Most of the front desk agents that are hired come from other hotels in the area after they quit or are fired. Jacob is not involved in the hiring for the hotel at all and does not get involved with training and development. He spends most of his days looking at the financial reports for the hotel and analyzing average daily rates, occupancy rates, and REVPAR.

Jacob knows that he has many problems to deal with and so he goes to the Morning Dues hotel to observe things over there for a while. He sees a happy crew and talks to Martin about how he is making that happen. Martin is happy to help but wants Jacob to go back and observe his employees first and come up with ways that he specifically can help guide Jacob.