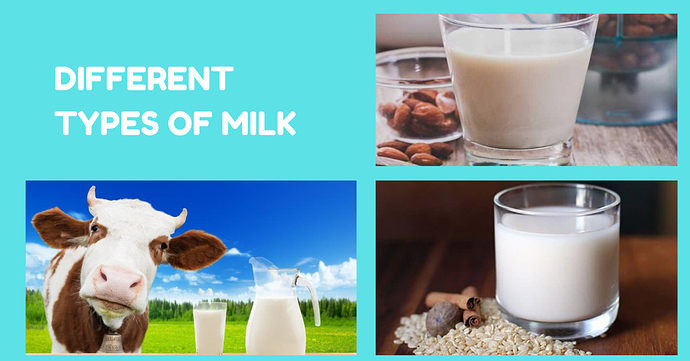 Almond milk is low in protein compared to some of its counterparts, but it has a wide range of other nutrients. This is a dairy-free milk created by toasting and grinding the crunchy nuts and blending them with water. The result is a milk with a creamy texture and a nutty taste. Comes in Sweetened and unsweetened flavors.

Oat milk is made by soaking oats in water, blending, and straining the mixture. Oat milk comes from Sweden and is slowly gaining in popularity at coffee shops across the U.S. It can also easily be made at home with just oats and water. Comes in: Organic or conventional in original and flavored varieties.

Whole milk is defined as milk with a fat percentage of somewhere between 3.25% and 3.5%. It’s more or less the closest you can get to drinking milk the way it comes from the cow before being processed. While it will be pasteurized and (probably) homogenized, it has the same ratio of fat to milk as raw milk. Whole milk has the highest amount of calories and saturated fat of any type of milk, along with more cholesterol.

Also known as skimmed milk, skim milk is milk with zero fat. Because of its lack of fat, it’s generally thinner than other milks, which some companies combat by adding powdered milk, which can contain carcinogens such as oxidised cholesterol. However, not all skim milk contains additives, so be sure to check the label and list of ingredients to ensure that you know what you’re buying.

Soy milk offers a complete protein, like dairy milk, but it can affect hormonal balance. Soy milk is produced by soaking dried soybeans and grinding them in water. Comes in: Flavored and unflavored varieties.