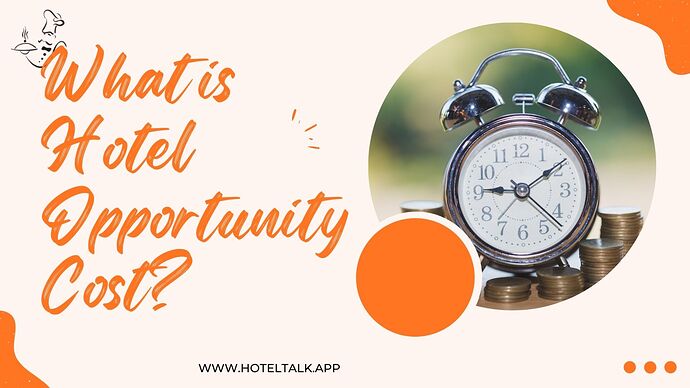 The preceding profit margin analysis demonstrated the importance of sleeping room sales in a hotel. That profitability is only beneficial when the rooms are sold. Sleeping rooms at a hotel are considered a perishable commodity. Each night, when a room goes unsold, the hotel loses that opportunity to ever sell it again. A hotel cannot regain that opportunity. This is called opportunity cost.

Unlike a manufacturer of widgets, for example, who can make as many widgets as they wish and store them in inventory until they are sold, a hotel’s inventory expires on a nightly basis. A hotel has only 365 (days in the year) multiplied by its number of sleeping rooms available for sale in a year. This is again where room sales differ from food sales. Catering sales and food/beverage sales in the outlets have two advantages:

Even if that storage time is only one day, it has an opportunity to be resold. The “Empty Room Theory” states that once a room goes unoccupied, it is gone forever.

If we refer back to the example used in determining room cost and profit margin:

$21,352,500 is the maximum potential room profit that ABC Hotel could make in a year. Each unoccupied room, in essence, subtracts from that number. It is understandable why hotel owners and managers focus so much effort on occupancy.

A hotel cannot have significant outlet/ancillary traffic or groups that contribute to the catering revenue portion of the success triangle without occupied rooms. Beyond the profit and opportunity cost differences, occupied rooms provide a captive audience. A captive audience in hospitality is defined as guests who are staying at the hotel and will, for convenience and lack of other options, utilize the outlets in the hotel. A captive guest will eat in the restaurant, use the business center, and be part of or host a meeting at the facility as a function of this quotient. The captive audience quotient applies to both outlet/ancillary sales and catering sales. The captive audience guest is already there at the hotel. Freestanding restaurants must attract their patrons to the facility before any sale can be made. This is where the separation between relying on local traffic and a captive audience is most apparent.

A guest staying at a hotel is more likely, for convenience and other reasons, to choose some outlet of the hotel (if it offers such services) at least once. The appeal of room service and specialty on-site restaurants may be one of the buying decisions that drive a guest to choose a particular hotel. Golf courses and other recreational facilities can be of such stature that the guest chooses the hotel for that very purpose.

The catering traffic at a hotel benefits by the same captive audience quotient. Group related catering is measured by its contribution to the overall catering effort, which is reviewed next.