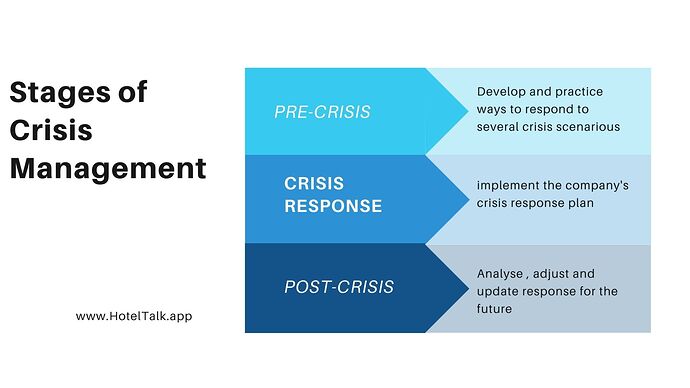 Hospitality firms’ crisis management requirements are as diverse as their safety and security requirements. Hotels, for example, would be more likely than a take-out restaurant manager to have difficulties in evacuating visitors during a weather-related emergency. The physical location of a house is another issue to consider when preparing for a disaster. Hospitality managers in the Midwestern United States, for example, may not have to worry about hurricanes, but they must be prepared for snow and ice storms, which may be just as disruptive and dangerous. And certain events, such as power outages, criminal activities, fires, and workplace violence, can create a crisis situation regardless of where your property is located. It is up to you, as the manager, to be prepared if any of these things happen. In essence, crisis management entails three main tasks. These are the following:

1. Pre crisis Planning
Obviously, it is too late to prepare for a catastrophe once it has occurred. Not only will you respond poorly if you are unprepared, but you may also be held legally liable for your lack of planning. Consider Bryan John’s situation. A piece of steak became caught in his throat when he was eating dinner at a steakhouse, and he began to choke. No one on the restaurant staff had been prepared to cope with such an emergency, and Mr. John may have perished if it hadn’t been for a fellow diner who performed the Heimlich maneuver. If that had been the case, the restaurant would almost certainly have faced a lawsuit, as well as the related costs and unwanted publicity. Everyone concerned would have wondered why the restaurant had not been prepared for such an event. Why wasn’t someone from the restaurant attempting to assist?
A hotel manager should create and implement an emergency plan to successfully prepare for a catastrophe. Simply said, an emergency plan analyses potential crisis circumstances and then specifies how the business will respond to them. Finally, that plan must be put into action so that, in the event of an emergency, everyone on site will know what to do and when to do it.

2. Crisis Response
Even if you and your staff are properly prepared, when a crisis occurs, you will be confronted with an overwhelming number of reactions and replies from your personnel, guests, and possibly even the media. The ultimate impact of the crisis on your company’s reputation, potential legal responsibility, and financial health will be determined in large part by your ability to effectively manage and regulate these responses.

Management Response
During a crisis, things move at a breakneck speed. Managers who have prepared and practiced an emergency plan have a higher likelihood of acting professionally than those who have not. However, a manager’s specific approach will, of course, be determined by the nature of the situation.

Staff Response
The reaction of your team to a crisis is just as crucial as your own. In a crisis, your staff’s job is to assist you in protecting people and property without putting themselves in danger. In the event of a fire, for example, employees can play an important role in warning guests, assisting with evacuation, safeguarding assets if time allows, and calming upset and traumatized guests.

Guest Response
Guests may be involved in a variety of ways when a crisis happens. They may have witnessed crimes or accidents, or they may be victims themselves, or they may simply be worried onlookers. You cannot control a guest’s reaction to a crisis scenario; but, you can control how you respond to the guest, and how you respond to the guest can have a significant impact on the guest’s final reaction.

3. Post-Crisis Assessment
As previously stated, evaluating your emergency plan should be a continuous activity, but it is especially important in the aftermath of a disaster. You’ll be able to assess your own performance, as well as that of your staff and guests, as well as your effectiveness in dealing with the media, at this time.
A post-crisis performance analysis can be done in a variety of ways. The STEM approach, “Prevention Philosophy,” that I mentioned before is a fantastic place to start. Consider Brenda Mendez’s situation. Brenda was the manager of a limited-service motel with 64 rooms near the airport. Northeast Airlines, her most important client, slept in her motel during their layovers. A major accident occurred one night when her van driver was returning from the airport with a crew, badly injuring four crew members and the driver. Despite the fact that the reason of the accident was not immediately evident, negative publicity followed, threatening to tarnish the hotel’s safety image, and ties with Northeast Airlines were strained. Brenda, fortunately, had a strategy in place to deal with the accident. However, she felt that some aspects of the plan could be improved afterward, so she opted to do a post-crisis evaluation. Brenda went over the following topics using the STEM method:

Selecting: Did procedures exist to guarantee that the drivers were competent for the job? Were licenses subjected to background checks? Were eye exams and, if necessary, corrective glasses required as part of the hiring process? The answers to these and other questions would be necessary if an opposing attorney sued the hotel for carelessness.

Teaching: Properly training employees, which involves employing feedback mechanisms like competency testing to confirm that the instruction was successful. The number of personnel who would have needed training in advance of such a catastrophe in the van accident just described is quite large. The van drivers would almost certainly need to be trained in first aid. Staff at the front desk and night audit would also need to be taught on how to handle calls from the media, the airline, and victims’ families. Those in charge of sales would almost probably be asked to reassure consumers about the hotel’s security. When staffs are taught how to react to a crisis, the chances of them making a mistake that worsens the situation are considerably reduced.

Educating: It’s important to remember that managers must also educate themselves on a regular basis. A plaintiff’s attorney will want to know the level of management competency if a lawsuit is filed as a result of a crisis. Employee selection and training are ultimately the responsibility of management. As a result, a good post-crisis assessment also includes a review of management’s capabilities. In addition, management’s treatment of the press should be scrutinized. Was it communicated to staff who would be the media representative in the case of a crisis? Was the spokesperson/manager thoroughly prepared and studied? Was there anything expressed by management or personnel that could make the operation more liable?

Managing: Management encompasses the manager’s activities as well as the systems and procedures that management establishes and enforces. A post-crisis evaluation must include a review of those processes and procedures to see where they might be improved. A review of the van accident would include an investigation of all hiring and training practices relating to van drivers, training of personnel affected by the crisis, and management’s emergency response protocols and procedures. In addition, a review of other aspects such as first-aid supplies, insurance coverage, and the property’s ties with law enforcement agencies would be conducted. Of course, the idea is to apply what you’ve learned in one crisis to help prevent future crises and to use your legal knowledge to respond more effectively if a similar crisis arises in the future.