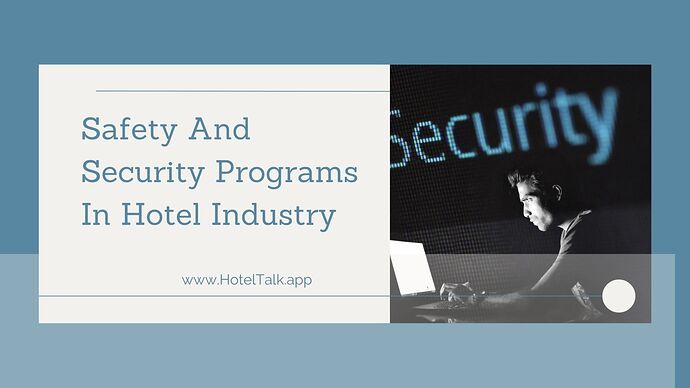 Different companies providing hospitality services have very different security needs, so it is challenging to provide one all-encompassing list of things that should be implemented to reduce the chances of accident, injury, or loss. However, from a legal standpoint, your obligation is to act in responsible ways in the face of risks to people and property.

Safety and security programs generally start with the recognition of a need, that is, a realization that a threat to people or property exists. Consider the case of Tony Brown. Tony is the manager of a popular pizza parlor that also serves beer and wine.

Over the past six months, Tony has had four guests and two employees complain of vandalism to their cars. The damage ranged from scratched paint to broken windows, and in it least one case, it appeared that the vandals attempted to break into the car. Before these six incidents, Tony never had a problem.

Now, however, he realizes that he must act responsibly to serve the interests of his guests and employees, and protect their property. A need for security has surfaced. Note the five major areas into which this list is divided: guests, employees, property, facility assets, and crisis situations.

Once a threat to safety or security has been identified, managers and security personnel
can develop an appropriate response to address that threat. Many different components of a hotel’s safety and security program would have to be addressed by management. Responses, or programs, can take a variety of forms including:

In some cases, the best response to a threat simply involves monitoring the activities in a particular area with greater frequency. In the parking lot problem just described, one of Tony’s best responses could be to increase surveillance of the parking lot of his pizza parlor.

Routine patrols carried out by management, employees, an outside security firm, or the police may serve as a significant deterrent to vandals. Other safety and security threats can be addressed by installing video cameras in public areas to record activity. In many cases, the presence of the camera itself can help deter crime.

Many organizations have actually chosen to forgo the use of video cameras as a guest – safety tool if they cannot be monitored, because the presence of the camera could give the guest a false sense of security.

In some cases, holding a routine and comprehensive inspection of facilities can help identify possible threats to safety and security. As a professional hospitality manager, you will be expected to carefully monitor your facility ’ s compliance with accepted standards of a safe and secure operation.

Many sophisticated travel agency companies concerned about the safety of their clients, as well as corporations concerned about the safety of their employees, have developed their own safety and security checklists. As a manager, these can be very instructive because they let you know what travel agents feel is important in a facility they would recommend to their clients.

When the facility itself contributes to a threatening situation, that facility may require modification. For example, worn carpets should be replaced before a guest falls; sidewalk curbs should be painted if they are not visible to pedestrians; and extra lighting might have to be added in specific areas to increase safety and security.

Routine policies and procedures can also serve as an effective response to threats to safety and security. Consider the case of the hotel that offers guests the use of a safety deposit box. Obviously, procedures should be in place to ensure the security of the items placed on deposit with the hotel.

Periodic product inventories, plate counts on buffet meals, and signing in and out of management keys are all examples of standard operating procedures that directly impact the safety and security of an operation.

The Hazelton Hotel was owned by the First Community Insurance Company, and managed by Grindstone Hospitality Management. After two separate guest assaults occurred inside the hotel rooms, Grindstone Management approached First Community Insurance with the idea of either installing a closed circuit video camera system in all hallways or increasing the lighting levels of the hotel’s corridors.

First Community Insurance authorized Grindstone Management to purchase a video surveillance system consisting of six cameras and a central location to view them. The events shown by the cameras were not committed to tape.

Late on the evening, Mrs. Walker checked in was assigned a room at the end of one of the hotel’s corridors.As she attempted to insert her electronic key into the door lock, she was
assaulted. Mrs. Walker sued both Grindstone Management and First Community Insurance, claiming that both companies’ failure to monitor their cameras was a direct cause of her assault.

In addition, she claimed that the cameras’ use was deceptive, in that it gave her a false sense of security. As she stated, “The cameras showed me the hotel cared about my security, and I wanted to stay in a safe location.” According to time sheets provided under subpoena by the hotel, an employee was assigned to view the cameras in the central location for an
average of two hours per night between the hours of 8:00 P.M. and 6:00 A.M.

The assault occurred at a time when no employee was monitoring the cameras. The attorney for First Community Insurance stated that the company was merely the owner of the hotel and not responsible for day-to-day management; thus, is should not be held responsible for Mrs. Walker’s injuries.

Grindstone Management maintained that it too should not be held responsible just because the cameras installed were not monitored at all times. The presence of the cameras themselves and electronic locks on their doors demonstrated that the company used reasonable care in the protection of its guests.

Once a hospitality firm has identified the threats to its operation, and designed a safety and security program that addresses those threats, it must put the program into action. Large hospitality facilities may have individuals specifically designated for these tasks, while in smaller properties every employee may have implementation responsibilities. In all cases, local law enforcement officials should be a vital component of a property ’ s safety and security program.

In a large hospitality facility, a safety and security department may exist. The department head would ordinarily report to the general manager of the facility. Staff members in the department would be responsible for routine duties such as patrolling the facility for unauthorized people or suspicious activity, performing inspections, assisting the police with crime reports, and serving as a liaison with insurance carriers.

If yours is a small facility, you may decide that it makes sense to contract with a security guard company to hire a guard to implement all or a portion of your safety and security program.

Generally it is the role of the security guard to:

Conclusion: Hotel security and safety is a complex issue, but it is important to get it right. Analyze and respond to threats to persons and property in a responsible manner.