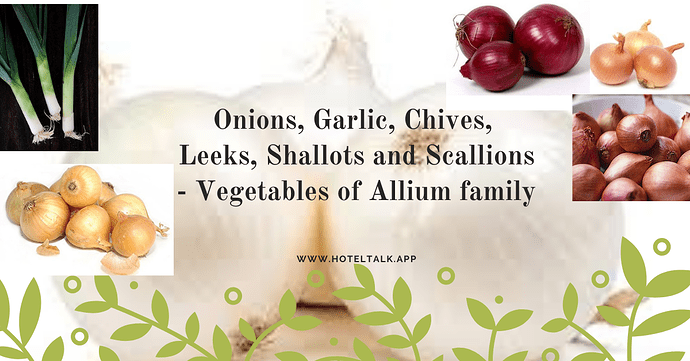 Most common types of onion used in hotels & restaurants are …

The most popular among cooking onions, because they add excellent flavor to all types of dishes like sauces, stews, soups, and meat dishes. This yellow onion variety is good for frying and sautéing because its sweetness intensifies as it caramelizes. Usually, if a recipe calls for adding chopped or sliced onions to the dish without specifying the variety, you should use yellow onions.

Yellow onions are the main ingredient of French onion soup and used for preparing onion rings and to top a hamburger.

They are quite like yellow onions in flavor when cooked, and slightly milder when served raw. But once these onions are cooked, they taste very nearly the same as the yellow onion and can be used in recipes to substitute yellow onions or vice-versa.

White onions have papery white skin and mild flesh with high sugar content. They have sharp-flavor but mild and sweet. These are commonly used in Mexican / Latin American dishes if the recipe calls for raw onions —especially in salsa, salads, or sprinkled on tacos as a garnish. Can also be used in preparing white sauces.

There are a many other types of onions which are not ubiquitous but are still used in culinary, pertaining to authentic cuisines of certain region.

Cipollini Onions – strong onion taste (similar to shallots), but they are also very sweet, making them well suited to braising and roasting.

SHALLOTS – were formerly classified as a separate species but recently considered as a type of onion. Shallots are extensively used for cooking in south India and are called as “small onions”.

Other countries who mainly use shallots are Mexico, China, Korea & Japan.

Green onions are very popular in Asian (mainly Chinese & Japanese) & Mexican cuisines. The onion can be sliced or chopped and sprinkled over a salad, noodles, pizza, pasta, casseroles, stews, and curries, garnished over soup such as egg drop or tortilla, minced onto deviled eggs or in pancakes, mixed into salsa, baked into biscuits, layered in sandwiches, or added to stir-fries. They add color, crunch, and mild onion flavor to variety of dishes.

Spring onions have larger bulb when compared to Green onion/Scallion. Spring onions (the bulb) are sweeter and mellower than regular onions, but the greens (leafy part) are more intense in flavor than scallions.

Though there are slight difference between scallions / green onions and spring onions, they can be used interchangeably in recipes. The white bulb is the part used mostly of Spring Onions. Scallions are used entirely.

GARLIC : The Latin word for ‘garlic’ Is “ Allium ”

It is native to Central Asia and northeastern Iran. A very common seasoning used worldwide, with a history of several thousand years of human consumption and use.

The edible part of the plant is a bundle of leaf sheaths that is, the white and light green parts, sometimes erroneously called a stem or stalk. Raw leeks can be used in salads. Frying makes it crunchier and preserves the taste. The darker green parts have plenty of flavor , sometimes tied with twine and other herbs to form a bouquet garni .

The flavor of a leek is like onion but more herbaceous, though not like any herb in particular. Leeks partner well with chicken, ham, cheese, cream, garlic, and shallots. when they are very thinly sliced, they can be a nice garnish for soups, salads, roasted veggies, meats, fishes, or other dishes. Or you can also mix them into green salads, dips, or salad dressings. In France, Whole boiled leeks, served cold with vinaigrette, is considered as “Poor man’s asparagus”.

Leeks were valued most by the ancient Egyptians, Greeks and Romans.Today, leeks are an important vegetable in many northern European cuisines.Countries who produce leeks are mainly Indonesia, Turkey, France, Republic of Korea, and Belgium.

The primary flavor of chives is onion with a slight garlicky note. Chives can be used as a substitute for chopped green onions and will produce a milder flavor. Chives are mostly used in European cuisines, especially in few traditional dishes in France & Sweden. Chives cultivated in china are a different variety and has a strong “garlicky” flavor which makes it different from regular chives. Chinese chives have yellow/white flower where as regular chives have purple flower.